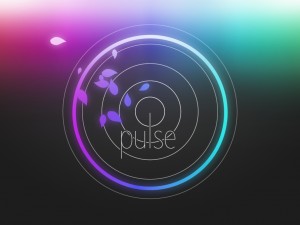 Pulse is an interesting and different rhythm game. It is unlike basic guitar hero and tap tap revolution games where you are tapping according to shapes flying at you. Pulse has changed the rhythm game in a very good way. It has offered me quite a bit of entertainment and shows promise to keep entertaining me for months to come.

Upon starting Pulse you are greeted with a beautiful start screen with Pulse’s logo with well a pulse coming from it. After pressing a rotating white dot a list of songs appears for you to choose from. Each song gets harder as you progress down the list and at the bottom are four songs by philly’s local artists. Now here is the only issue I have with Pulse and it is as soon as you start playing. There is no tutorial, well there is a tutorial song that is very easy but only for someone who knows what they are doing. I assumed to just start pressing the white circles as soon as they appear but you are supposed to wait until the pulse comes in contact with the dot. This was a small issue and it took me no time to figure out the game but you would think with a new platform like this there would be a more in-depth tutorial. 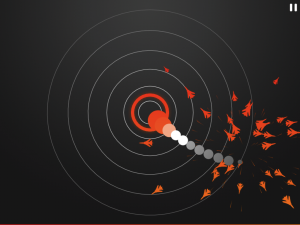 Once I got the hang of it though I noticed that everything works very well and it was a lot of fun to try and get a perfect score. The rhythms are mostly easy to follow until you get to more difficult songs, but that is the point of the game. There are no true objectives other than getting a good score and all the songs come unlocked. But there is great replay value in that I was able to play a song some five times in a row because I wanted a better score and the songs are fairly catchy.

Overall Pulse is a fun and new game that is totally worth the $4.99 and will last a while. The developer told me they will be releasing new songs with local philly artists every moth so you can expect a great amount of extended gameplay (4 new songs a month). Check it out and tell me your thoughts in the comments!