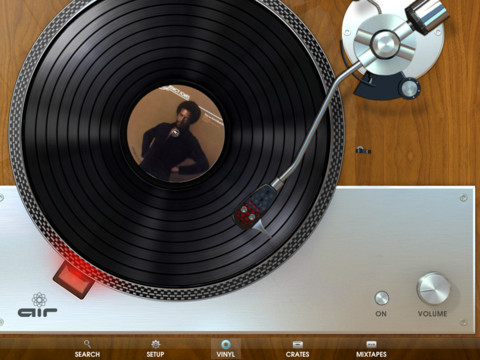 AirVinyl, by Bappz is a great app with a nice retro interface that allows you to listen to your music like no other. When you first open an app you’ll see the retro vinyl player, pressing the genius icon in the upper right side will get you to the menu which allows to select how you like to view your music. Either Vinyl or Mixtapes; The mixtapes are basically playlist in which you chose how you want to play it.

AirVinyl was created from within Air Studios which excelled at recreating ambience, and full audio quality that the artist intended to make their song play. Air Studios was created in 1969 by legendary Beatles producer Sir George Martin. Based in a converted church in London, the studios plays host to some of the greatest recording artists in the world. AirVinyl has been developed in conjunction with some of Air Studios award winning engineers to deliver the best sound from your iPod, iPod, or iPad, that recreate the warm and ambience of vinyl recordings.

AirVinyl for iPhone is now available in the App Store.