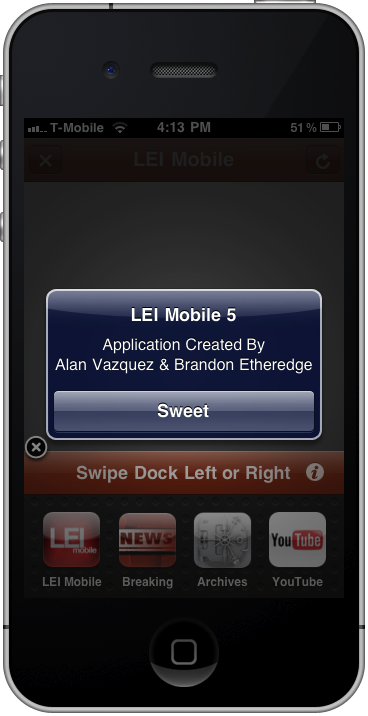 Good afternoon everyone. I am very happy that you guys could join us today as we unveil the next generation of our most popular application. Yes folks, that’s right, I’m referring to LEI Mobile.

Now, the LEI Mobile app has been nothing but a success. We have shipped over 150,000 copies of the application across iOS devices and Mac OS X. We have been using the iTunes App Store and Cydia as our distribution channels, with BigBoss as our exclusive carrier on Cydia. We couldn’t be happier with the performance of LEI Mobile in the iOS software market.

We have garnered over 36% market share in the Site-Specific market on Cydia since our launch just one year ago. We have swiftly overtaken the market and we are very excited to be in that #1 spot with our closest competitor at about 12% market share. P1nkSn0w and SocialMe have also been performing very well, grabbing over 50,000 downloads since January (SocialMe) and July (P1nkSn0w). We couldn’t be happier.

We have walked a long road to get where we are today with LEI Mobile. LEI Mobile v4.1 is the current version that is out there today. LEI Mobile is running on top of our AVBE v2.1 core right now, but today, we are going to give LEI Mobile a complete makeover.

So, it is my great pleasure today to introduce the 5th milestone and 5th major revision of LEI Mobile. We’re calling it, LEI Mobile 5! We are dropping the “v” from the version name and we are simply going to call it LEI Mobile 5. 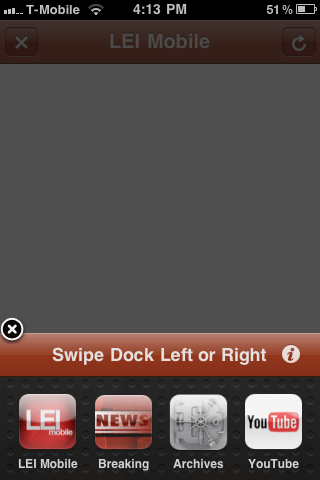 What’s so different from LEI Mobile 5? In short, everything. We have completely taken the application apart and given it a brand spanking new user interface as well as a bunch of bug fixes and performance boosts. Everything has been rewritten and revised. It’s also running on top of our latest AVBE core, AVBE v3.0! 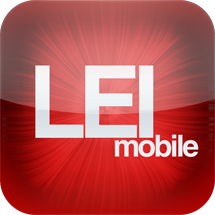 So what’s this AVBE core all about? Well, you see, we use the AVBE core for all of our applications, so this just lets you know that all changes, both user interface and performance, will be arriving to our other applications as updates(and coming to future applications) in the coming weeks. P1nkSn0w was the first of our applications to run on an early version of our AVBE v3.0 core, it was running on a very early beta. However, since then, we have a ton of UI, coding, and performance tweaks and enhancements in the GM of our core as compared to the early beta in P1nkSn0w.

Now, LEI Mobile 5 is the best coded and smoothest version of LEI Mobile we have ever made. The speed and performance on this thing is just stunning. From the first time you touch the icon, you can immediately feel how smooth it is. It doesn’t glitch up in opening at all, not even on an iPhone 3G running iOS 4! We have focused a lot of energy into making this perfect. We have been running tests and running it on our devices for a long time now, beta after beta, just making sure that no stone is left unturned. We have been able to patch all bugs that have been reported to us in the past 12 months in LEI Mobile 5, and then some more we found. 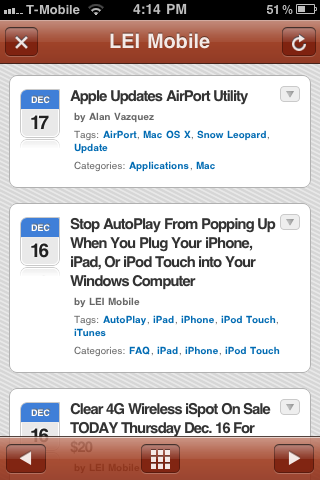 LEI Mobile 5 sports a new user interface that may look and feel familiar to you all. You access everything using the dock that we have built into the application. If you are in the “browser view” you can click the little “home” button that we have at the bottom of the application to reach the dock, wherever you are, just click the home button to get back to the dock.

All you have to do is swipe left or right in on the dock to access our many services, then, simply tap which one you want to use. If you want to leave the dock and want to get back to your web content, simply click the black”X” or tap anywhere in the big area where your web content is faded out.

Now, we have a couple other changes that you may run into. We no longer have a dedicated “Settings” application, but rather, we have really boiled down this app to as basic (without losing any important features) as we can get it. 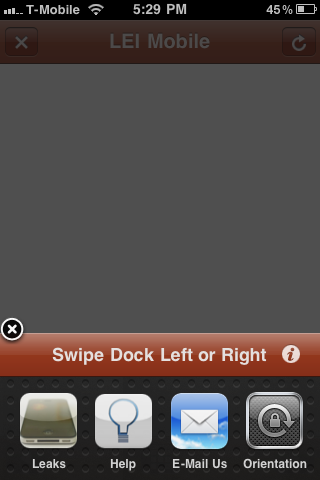 We have added a new “Orientation Lock” to the core. All you have to do is scroll to the last page in the dock (in whatever application that uses our AVBE v3.0 core) and tap on it. This new lock makes turning in landscape in the “browser view” possible.

Something else of note, a “E-Mail Us” button will always be on the last page in the dock in any AVBE v3.0 application that you come across. It will be to the left of the “Orientation Lock”. 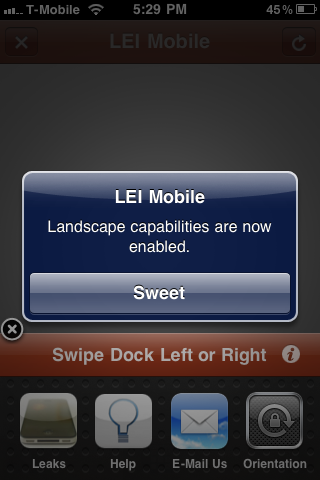 We did this to eliminate fragmentation within our own applications and core. As with any other version of the AVBE core, we have made some things always be in the same spot and make all of the applications behave the same so that users aren’t confused as to how something will work.

Fragmentation is one of my own personal concerns and the AVBE v3.0 core truly makes fragmentation a thing of the past.

So those are the major changes in the interface. Now I want to talk a little bit about the under-the-hood stuff. There are some major refinements and changes that have been going on. 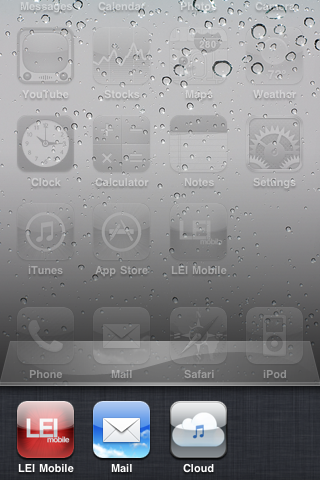 LEI Mobile 5 has full support for iOS 4 multi-tasking. We have finally implemented multi-tasking to LEI Mobile so you can open the app, load one of our services, check the news, and get back to what you were doing. We want the interaction between us and new posts and you guys to be as seamless as we possibly can. The app uses less than 2 MB of RAM when running in the foreground and less than 1 MB of RAM when it’s running in the background. We always want to push for better performance and we don’t want to disrupt any other apps or services that you may be running.

Now, we also have an updated Push Notifications implementation. Push Notifications are more reliable and follow Apple’s new APNS standard with the much higher 2048-bit TLS/SSL certificate security. Speaking of notifications, the annoying Location and “Cannot Connect” pop ups are gone and the bugs are now fixed. This is going to be a very welcome update as even I would come across the bug and would be annoyed by it.

We also follow the new iOS 4.2.1 standards and compatibility so we’re up to date. We support iOS 3.2 and higher with this initial version but may bring an iOS 3.1.x compatibility update soon.

Let me summarize what we’ve been talking about today. LEI Mobile 5’s biggest features are incredible speed, improved performance, new user interface, and multitasking… However, there is… one more thing that I forgot to mention… 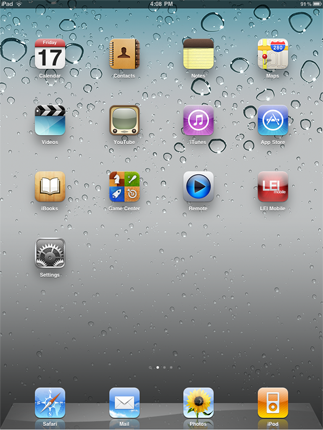 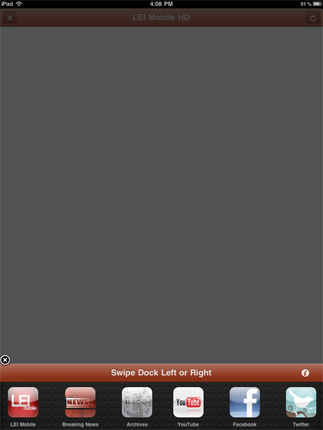 The only differences between the iPhone/iPod touch version and the iPad version are that the icons have been changed and optimized to look even better on iPad. Everything is at a higher resolution and it just looks spectacular on iPad as well as iPhone. 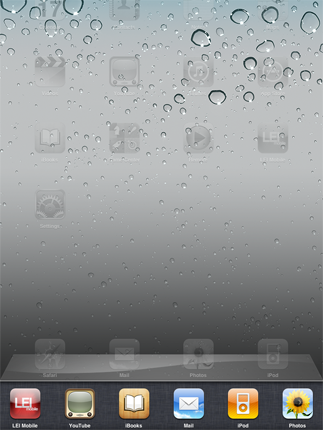 We also have brought multitasking to the iPad version so you can just switch over to LEI Mobile 5, check out the latest news and get back to what you were doing without skipping a beat! It’s a lot better than before! 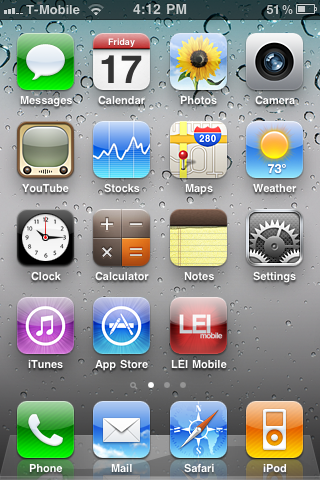 Now, LEI Mobile 5 HD also has another meaning, one that is very important to all iPhone 4 and iPod touch 4th gen users. LEI Mobile 5 is now fully supporting Retina Displays! We have made major changes to LEI Mobile 5’s internals to allow our app to have a beautiful interface on the iPhone/iPod touch (2nd gen/3G & 3rd gen/3G S), iPhone 4 & iPod touch 4th gen, as well as iPad. Our app is now truly ready to be called “universal”. 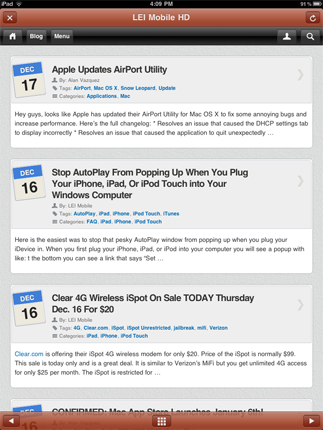 So that’s LEI Mobile 5. Wait, hold on, I am very forgetful today, there does seem to be even one MORE thing that I have forgotten to mention. Internally, we call it Project “Rogue” but we are now ready to unveil it today. We have been doing a lot of changes to the app side of things, but what about the backend services? Well, as you may know, 4 weeks ago, we went down for a total hardware failure in our LEI Mobile infrastructure, the cause of this is unconfirmed and unknown, anyways, as you recall, the mobile site was the same mobile site that we have been using for the past 2 years or so on iPhone, but there was no more mobile site for iPad. 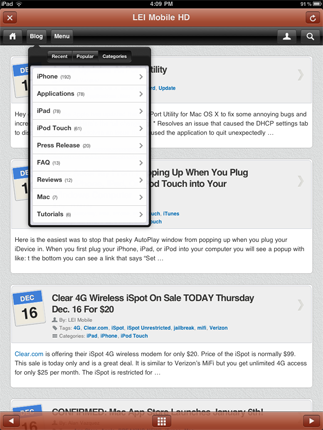 Why? Because we just upscaled the iPhone’s mobile site to fit on the iPad’s huge screen. However, we were not happy with this because it just didn’t work right. So we decided to take it down. 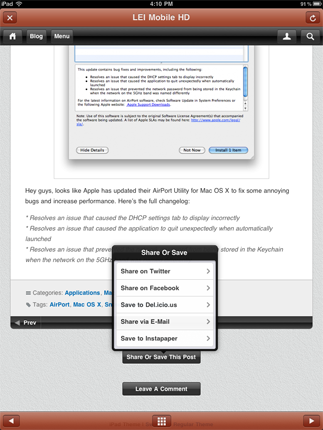 Now, today, I want to show you a brand new mobile site for the iPad that will begin to roll out today (we have been testing it for a few days at night so you may be one of the lucky few who has seen this already). This new mobile site brings a bunch of bug fixes for the iPhone as well as iOS 4.2.1 compatibility, but it changes the whole experience on iPad.
As you can tell, the new user interface is sleek and looks like it’s designed for iPad. The new site takes complete advantage of the iOS interface guidelines for making a great native app. The new site has popovers! It’s a more interesting feeling and it brings a lot of what an app would do, but on the web. This new site uses the new HTML 5 standard as well as other updated technologies. 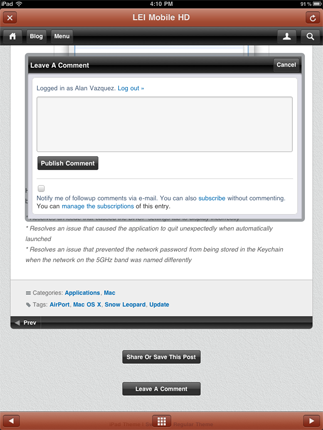 All you do is tap on the name of an article to jump right to it. Now, this is where it gets cool. You can post a comment or reply to a comment, but instead of an entry field to already be there, we drop a comment entering sheet from the top of the screen and put it center stage. it’s really cool. The animation makes the sheet to just slide down from the top. 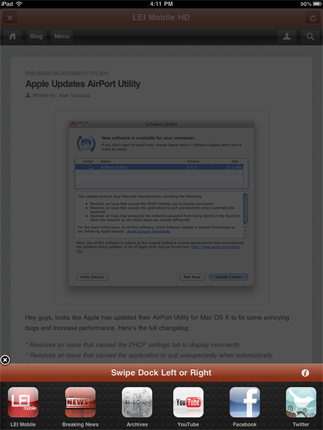 LEI Mobile 5 will be available worldwide on January 3, 2010 for free. So load up iCal and your Calendar app and enter this in because is the best version of LEI Mobile yet. Again, the new mobile sites are going live today, so go ahead and try those out!

I am very happy to finally be announcing LEI Mobile 5, it’s been a long road but we’re finally here. Just 13 months since we originally launched the tab-based LEI Mobile v1.0 and just 1 year since we launched the 2nd major milestone, we have hit the 3rd major user interface milestone and the 5th major revision of LEI Mobile, and it’s one hell of an update.

So thank you all for joining us here today and we hope to see you back here on January 3rd with LEI Mobile 5, thank you!