Lord of Darkness 2 is a new RPG game for the Android platform, one in which the player gets to control a bomber, sword man, boxer or berserker and fight various out-of-space enemies. The game manages to delight users not only with an impressive graphic engine, but also with a smooth gameplay that takes one through various quests and suspense-filled levels. Monsters are awaiting on all corners, but for the skilled player this won’t be a problem. However, at the end of each mission there is also a boss fight which can prove more than challenging at times. With this in mind, here are few of this game’s highlights:

Lord of Darkness 2 comes with over 100 exciting fun-packed levels that allow anyone to test their virtual fighting abilities. Hordes of monsters can be fought at a time, but once the player advances in level the entire procedure becomes significantly more difficult. Monsters become harder to defeat and gain armor and extra knowledge points that truly put hero’s abilities to test. Furthermore, the boss battles ensures that no level is too easy to complete. 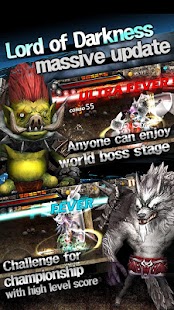 An all 3D Environment:

Unlike other RPG games for Android, Lord of Darkness 2 is built entirely in 3D. This means that all battles are rendered more realistic, giving players the impression that they are part of the battles. Whenever the hero gets in a fight with other monsters or creatures, the action camera shows everything up-close, hence giving gamers the opportunity to dodge attacks and fight back.

It’s very easy to play the game, and for those who have no idea where to start from there is also a short explanation at the very beginning. Basically, the hero is controlled with the aid of a virtual joystick and some A / B buttons that trigger the special actions of the character. Additionally, there are also some special power-up buttons that unleash the unique abilities of each hero, such as an earthquake, tornado, fire rain and more. However, these take some time to recharge. 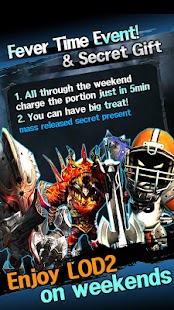 Treasures, Bonuses and Experience Gains Along the Way:

Another interesting characteristic of Lord of Darkness 2 is the entire amount of rewards that it gives to the player. Each defeated monster provides a certain number of skill points to the hero, which translate into level-ups and attribute increases on the short term. Furthermore, certain monsters and especially bosses can drop treasures, which can truly enforce hero’s strength.

Each class in Lord of Darkness 2 has it’s own special power. For example, the Bomberman is able to set up a bomb and annihilate all the enemies in a certain area. On the other hand, the Berserker can start an annihilation war with its gigantic sword and thus wipe all the enemy around. There is also the Boxer, which can get to reach impressive speeds for short periods of time.

Lord of Darkness 2 is an interesting RPG title for Android that is definitely worth a try, especially for fans of games like WoW or Runes of Magic. It provides a series of elements never met before in similar games, such as new classes of warriors, as well as a truly unique ranking system.