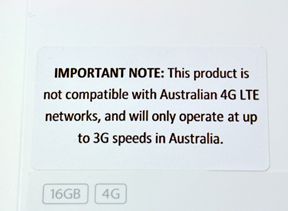 Apple is being targeted by the Australian Competition and Consumer Commission for calling the new iPad “4G-capable” when Australia  doesn’t have any LTE networks.

Apple’s already changed the wording on its website in response to the complaints to make it clear that Australian customers buying an iPad WiFi + 4G are only getting HSPA+ speeds, but that may not be good enough. Regulators are now suing Apple in a lawsuit over their use of the term 4G, and Apple’s ready for it.

In their defense, they mention that 4G doesn’t actually refer to any specific technology, but is just a marketing term. What do you think?