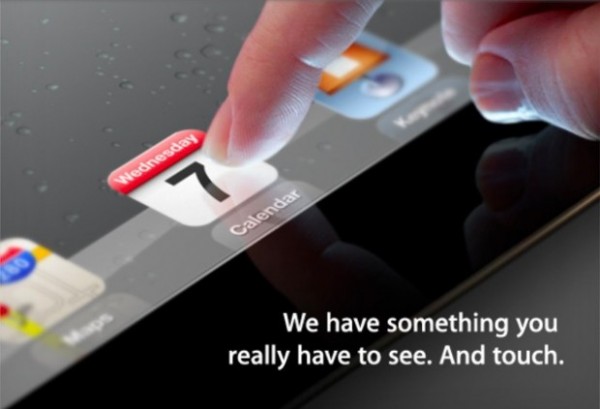 The Verge reported that Apple sent invites for that iPad 3 event we all have waited for.  It will be held on March 7 at the Yerba Buena Center for the Arts in San Francisco at 10 a.m. PST. The three app icons featured on the shot hold small clues: The Maps icon shows an infinite loop (it is the “who,” as Apple’s address is 1 Infinite Loop); the Calendar displays Wednesday, March 7 (the “when”); but the keynote app is mystifying.

This news officially exposed CNBC’s report calling for a March unveiling in New York City inaccurate. True to Apple’s form, the invite teases with an iPad close-up shot featuring a finger touching upon the Calendar icon. The tagline reads:

We have something you really have to see. And touch.

Both the wording (“something you really have to see”) and the image appears to confirm the long-standing rumors of an ultra high-resolution Retina Display (2048-by-1536 pixels), reportedly the key selling point of the device. Also interesting is lack of the physical home button—assuming the close-up was meant to depict iPad 3 in portrait orientation.