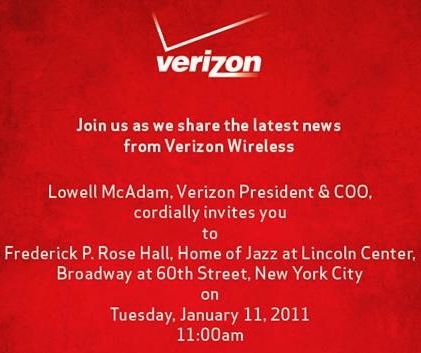 [UPDATE] Multiple external sources are now saying that Steve Jobs will in fact be making an appearance at Verizon’s keynote on Tuesday. See you all there!

Hey guys, this is some crazy news hitting us moments ago. It appears as though Verizon is holding a press conference on January 11th at 11am. Now, this is pretty trippy, not just because it’s 01.11.11 @11, but rumors were surfacing a few days ago saying that an “Apple-based” event would be going on that day.

Verizon has presented everything from new phones, to their 4G network, to talking about the wireless future at the CES opening keynote. What on Earth could they have left to present? Verizon iPhone anyone? 🙂

Now, some are saying that it would make more sense that Apple would present the iPhone to the world at their event, however, in all other cases of “second-carrier” announcements, Apple usually leaves that to the carriers (With the exception of o2 in the U.K.).

Multiple sources have confirmed that Tuesday is the big day. The day that AT&T finally loses exclusivity, I can also personally confirm that this will be the case. We WILL be seeing the iPhone come to Verizon on Tuesday.

Please join us on Tuesday, January 11th for (what we believe to be) Verizon’s iPhone keynote, it’s going to be historic and will rock the tech world in 2011.

Be here when it all happens!