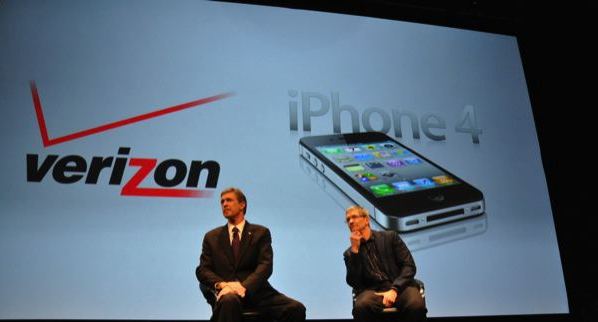 [UPDATE] It appears that the “HotSpot” feature does not require a seperate download, but rather, it’s built into iOS 4.2.5, read about it by clicking here!

Hey guys, well the event is over, it has been filled with a ton of amazing news, the biggest thing of note, the iPhone is now on Verizon and it has HotSpot capabilities! Now, during the keynote, I was checking sources and even Verizon’s own comments and website for news, and I had uncovered a couple facts such as that the iPhone has a 3G mobile-hotspot capability and it is on a multi-year ‘non-exclusive’ deal with Verizon.

It’s an interesting bit of information, but this allows us all to wonder when the Sprint or T-Mobile network! Rumors from 2010 placed the T-Mobile iPhone in Summer 2011.

As for the hotspot, it will be enabled by a ‘Verizon-Exclusive’ application that can be downloaded from the App Store. Also, it will be available free of charge. (as of the information we have today).

Now, the CDMA iPhone will be available for $199 for a 16GB model and $299 for a 32GB model. You will be able to pre-order on February 3rd on Verizon’s online store, Apple Stores, and Apple’s Online Store.

The phone will launch on February 10th.

The iPhone definitely has a new antenna and the new design is the one that was shown off in the video we received last week.

Also, the Verizon iPhone will be CDMA only (no 4G or LTE), which means that you can’t use Voice & Data at the same time. Here’s what Tim Cook had to say when asked:

“I think people place different emphasis on things — I can tell you that the number one question I’ve gotten is when will the iPhone work on Verizon. I couldn’t be happier to tell people that. They will make those sorts of tradeoffs.”

You will also be able to use your iPhone abroad when on a trip! Here’s what Verizon had to say:

“Yes, customers can use iPhone for voice and text in over 40 countries with data service in over 20 countries. For service availability and rate information, visit International Roaming Rates and Coverage. When travelling outside of these 40 destinations, the Global Travel program is the perfect short-term solution for the occasional or infrequent global traveler who needs to stay in touch when travelling internationally.”

Also, an interesting note, Verizon and Apple are not going to release information on plan pricing until later, here’s what Tim Cook said:

“We’re not going to talk about plan pricing.”

So that’s it guys! Thanks for joining us! If you had LEI Mobile 5 from the App Store you obviously had all of the latest breaking news hitting us today.