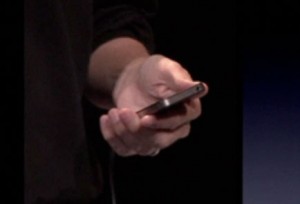 Hey everyone. Well, these past few days have indeed been odd. The iPhone 4 has experienced very odd issues due to manufacturing. However, the one that stands out to me the most is the cellular signal going dead when holding the iPhone 4 in the “wrong way” (according to Steve Jobs). So I decided to investigate the matter a little closer…

Well, before we get to that, I want you to remember just a few weeks ago. Try to remember back to WWDC 2010. If you recall, when Steve Jobs was trying to do a demo the iPhone 4 refused to load a simple web page. Steve Jobs later blamed that on “those MyWi things” and that there were “over 570 Wi-Fi base stations operating in this room, we can’t handle that..”. Right? Everyone turned off their wifi and everything was great right? Sort of.

Looks like Steve was holding the iPhone 4 the “wrong way”. Also, since the entire stainless steel band not only has the cellular stuff, but bluetooth, Wi-Fi, and everything, it looks like the demo crashed because of this design flaw.

Steve Jobs claims that it is not a “design flaw” however, it is very clear that Apple doesn’t want anyone to know the real truth behind what really happened. He adjusted the iPhone into the “right” way of holding it when he tried the demo again.

This design flaw would also explain why Apple released “bumpers” instead of actual cases. It’s not because they look good and “let you see the Apple logo”, but it’s because the case fixes this design trade-off that occurred. This is the real truth.

Now, Apple also didn’t want the same thing to happen like with the iPod nano 1st generation and it’s uncanny ability to scratch immediately. Apple was sued and they lost the case just a few months ago.

They did this to protect themselves legally, however, i think that we will see another class-action lawsuit soon against Apple and force them to giveaway a bumper with every iPhone 4 purchase.

So there you go everyone, Steve Jobs was briefed on the matter while Scott Forstall was demonstrating his portion of the keynote. When Steve realized that he had already showed the iPhone 4 off to the world and that the launch date was near, he saw that there was no way to fix this unfortunate flaw in his “new baby”. So Apple had to ship them that way. I believe that the delays are to fix this minor design error by placing some sort of plastic coating around the bands on the iPhone 4.

So there you go everyone, what do you think? Tell me what you think in the comments. 😀