Zombie Hills, developed by LFC Multimedia, is zombie shooter game that requires you to kill all zombies and survive. Once you kill a zombie your hill will level up and your goal is to build the highest hill which increases your score.

Not only does building a higher hill help you with a higher score but it will also help you survive longer and you will have a higher ground on the zombies below. I downloaded Zombie Hills because it looked like one of my favorite games called Mini Gore with the block head characters. This game is very similar in that it is very addicting and you get a ton of different weapons to destroy the zombies.

Once you kill a Zombie the hill will rise where the body fell. A soul will also rise and you will want to grab it. Once you have connected enough souls, you will have a special lighting power up that will kill all of the zombies on the screen. Some zombies will drop hearts that will increase your help. It a zombie gets close to you he will start to eat you and once your live goes down to zero the game is over. You can then share your high score on GameCenter, Facebook, Twitter, Email, or iMessage.

The  graphics and audio are very well done, but the only request I have would be that the developer tweak the controls a bit. I find it hard to move and shoot at the same time or even jump and move at the same time. Also the sensitivity seems to be a bit off, but I am sure this will be tweaked in the next update. This game was just released on July 26th but so far it is a great addicting 3D zombie game. 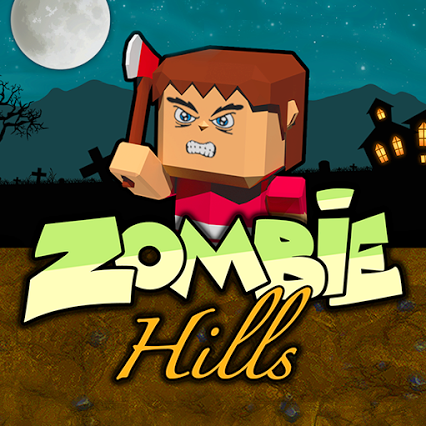 It is currently priced at just $0.99 and is worth checking out. You will spend hours competing to get to the top of the Zombie Hill.