This review was submitted by our guest writer Todd Swank. If you would like to be a guest writer here check out the Guest Writer page.  You can write about anything you want related to our website and we even provide you with promo codes to apps for you to review. 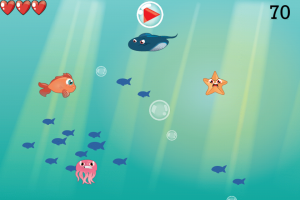 The Fish Dies in the End, created by Gutenberg Neto,  is destined to be 2011’s app of the year.  I’m quite certain it will surpass Angry Birds in sales.  OK.  Maybe not.  But it does have the potential to be a fun distraction for 6 year olds who stumble onto it with daddy’s iPhone while they’re sitting in the back seat of the car during a long ride to Grandma’s house.

The game starts out simply enough with a friendly looking fish who likes to swim up and down depending on whether you touch your iPad or not.  That’s pretty much the extent of the controls.  Now the game would be really dull if that were the extent of it, but as the title tells you:  The Fish Dies in the End!  You see, even though we’re all led to believe that the ocean is a vast space of water in the real world, in this game it’s pretty much jammed full of runaway puffer fish, jelly fish, stingrays and bloodthirsty sharks.  There’s even the occasional coral reef you need to avoid or risk slicing open the bottom of your fish gullet.  Sadly for the player, though, after you dodge all that stuff for a few minutes, the action gets pretty tedious in a hurry.

This app might be good to entertain the kids for 10 minutes or so, but I doubt they’d play it for much longer than that, but it only costs $0.99.  Here is a video of the game in action: