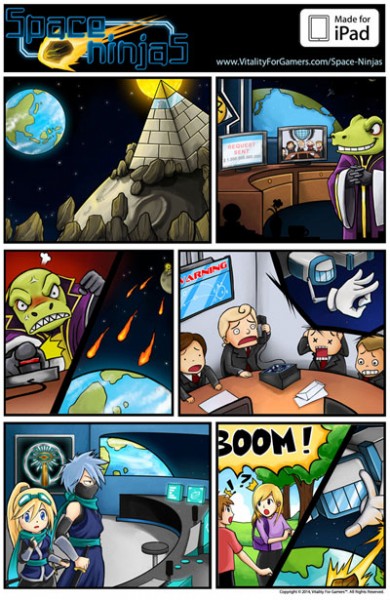 Space Ninjas, developed by Keen On You, is a flick based near earth defense game.

Your goal is to protect the earth from the ‘Evil Reptilian’ Nibiru. On the far side of the moon, the Nibiru is planning a New World Order (NWO), failing to collapse the world economy via the derivatives market he aims to reduce the human race to only a few for easier control and manipulation. Join the ‘Space Ninjas’ on the space station to protect the earth using the state of the art ‘Mighty Finger’ to deflect near earth objects and stop the Nibiru’s devious plans to pound the earth with Meteors.

The game is very simple to play, yet is addicting and challenging. There are 3 types of meteors. Small, Medium, and Large. The small meteors require just 1 flick, while the medium meteors require 2 flicks to change their course away from Earth. The large Extinction Meteors can only be destroyed by flicking the small and medium sized meteors into them. You have just just 3 lives where meteors can hit the Earth. Once that happens the game is over. The game can also end if your satellites are destroyed, so you need to protect those as well.

When you complete some of the challenges you can unlock upgrades such as having your satellites shoot meteors with lasers, and the ability to slow down meteors. This will help you get a higher score and longer time which you will want to try and get the highest score amongst your friends, family, and the world via GameCenter.

Overall the game has excellent graphics and sound. The major downfall to the great graphics is the large size. this game weighs in at 151MB so it will take awhile to download and take up a decent amount of space on your iPad. Other than that the game is super fun, entertaining and easy to play.

Space Ninjas for iPad is currently price at $0.99 and can be downloaded from the Apple App Store. If you are into defense type games, this one is worth checking out.