Smarter Stand is a simple accessory that will turn your Apple Smart Cover into a multi-position iPad stand. When Apple released the Smart Cover for the iPad it got the name “Smart” cover because it was magnetic and was a simple and effective way to cover your iPad. However, a cover is all it really is. Although it can act as a stand, the Smart Cover is a poor choice of stands for a lot of applications.

Introducing the Smarter Stand, designed by Dotan Saguy. It takes The Smart Cover and makes it smarter. Now your Smart Cover is not just a cover, but also a fully functional stand that can be used for multiple view pleasures. The clips are made out of ABS plastic so you know they are going to hold up for a long time. You could however use a paperclip as a cheap alternative to the Smarter Stand, but you run the risk of damaging your Smart Cover or scratching your iPad. At a current price of $14, I rather spend the money and protect my $500+ iPad.

We were able to get a pre-production sample of the Smarter Stand. The build quality of the sample is more of a prototype quality than the real finished product. This is due to the short time frame available to produce the samples within the Kickstarter project time constraints. The material used for the Smart Clips in the final product will be a much more rigid and dense type of plastic that holds its shape well and feels more substantial. As a result of the lower quality plastic used in this sample, the Smart Clips don’t slide as well as they will with the final product. However they are functional to hold the Smart Cover in the various positions described in the Quick Start Guide.

Even though the unit we review was not the final product, It was still an awesome design and worked just as expected. The pre-production model that we received very well could of been the final product. It is a sturdy plastic that will hold up overtime. Although it was tougher to move it around to certain positions, I find that to be a good problem. You don’t want them to slip and then have your iPad tumble down. Overall, Smarter Stand is a simple and effective design that everyone who uses Apple’s Smart Cover or Smart Case should have. It is money well spent!

Smarter Stand is being funded on KickStarter. It has already received over 6,500 backers who have pledged over $112,000.00. The Smarter Stand will retail for $20, but if you would like to get one before the general public you can pledge $14 or more. 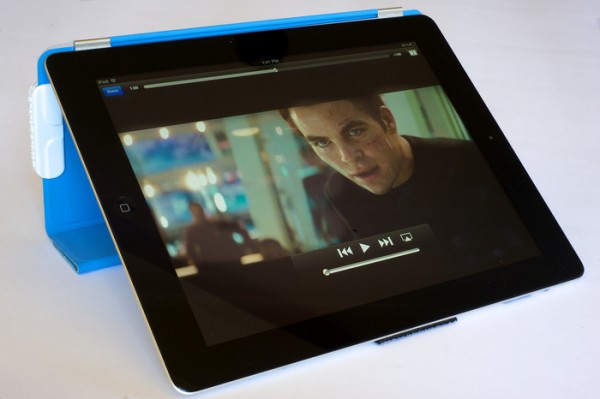