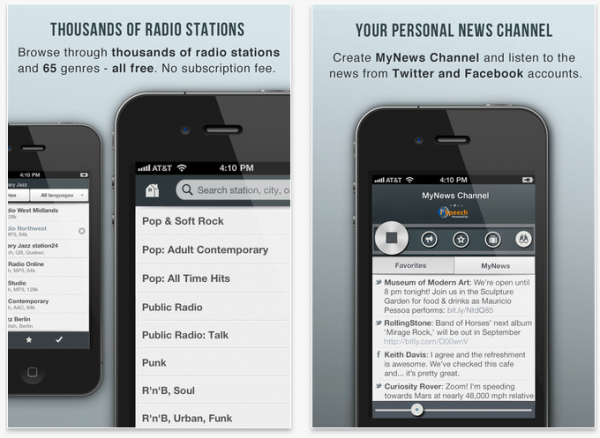 OneTuner Pro – Radio Player for iPhone, iPad, iPod Touch, developed by Workas, allows you to browse through thousands of channels to listen to music and shows from 183 countries in 75 languages. One of the biggest features includes the ability to create a Personal News Channel with news from your Twitter and Facebook Accounts. OneTuner Pro is the perfect radio application. OneTuner Pro is similar to the popular apps like Pandora and iHearRadio, but you can access live streams of you local FM radio stations and even AM stations as well!

Unlike the other popular radio applications OneTuner Pro allows you to discover new music from different countries and also has a feature to create your Personal News Channel. Personal News Channel taps into your Facebook and Twitter accounts. It uses iSpeach Virtual Newscaster to read status updates and tweets to you. You can change the voice to a number of different characters to best suit you. To create your personal news channel: tap “My News” tab on a main screen and add Twitter/Facebook account. After adding an account go to “Favorites” tab and tap “My News Channel” to start listening.

OneTuner Pro is a great music companion for your iPhone, iPad, or iPod Touch. It is a universal application so you only have to purchase it one to have it on all of your devices. It is priced at just $1.99 and is available on the Apple App Store.