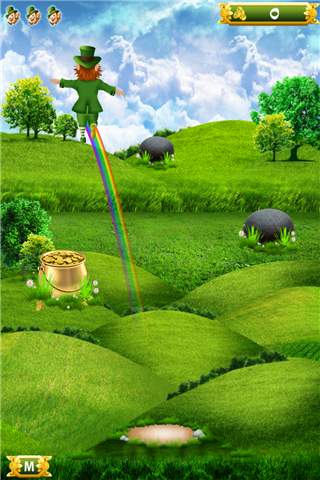 So you just got the new iPad and still have St. Pattie’s Day fever? Check out Leapin’ Leprechaun Lite for iPad, created by Mobile Magnus. The object of the game is to flick the Leprechaun named Paddy into his pots of gold. Once you have all his gold you advance to the next level. Currently this version only includes 3 levels and a bonus level where you have to beat the clock. They will release a paid version very soon that will offer a lot more features.

The games music and sound effects are hilarious. They will keep you entertained. The voice over is done by a 12 year old Irish lad named Ben. His Goal is To Be On the Ellen Show. He has red hair and freckles and a great sense of humor. He loves doing voices and having the craig (FUN). He plays rugby, and is a big game and movie fanatic. The Visual graphics are also stunning and look very good on the New iPad.

I would give this game a 4 out of 5 star rating due to the fact that it crashed a few times. There are a few bugs that need to be worked out and I am sure those will be fixed very soon. I also noticed that it was a bit difficult and there was no way to change the difficulty settings. I was positive I was flicking the Leprechaun in the right direction and with the right power but it went its own way. Anyways just try the game out and enjoy it because it is FREE!