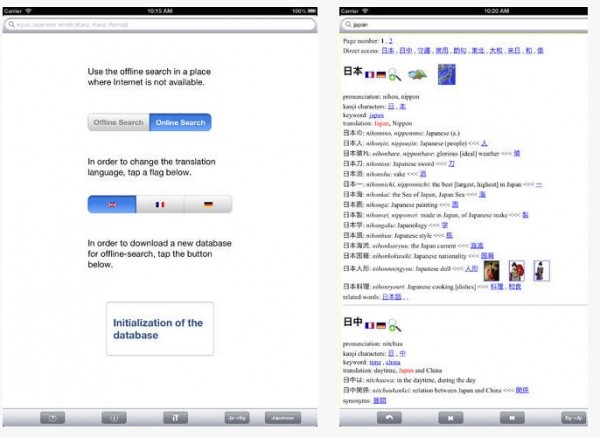 Previously we reviewed Euro-Japan Dictionary for iPhone and the developers, Free Light Software, just released Euro-Japan Dict Tablet. This new iPad applicaiton is pretty much the same exact app you love on the iPhone enlarged to make use of the iPad’s larger screen.

Euro-Japan Dict Tablet is a Japanese dictionary which supports not only 3 major European languages: English, French and German, but also 2 search modes. Not only can you have instant up to date access by using your internet data connection, but you can also have an offline database in case you are in an area where you do not have cell service or Wi-Fi. Having an internet connected search is going to bring up better results including pictures and maps, but when you are in a pinch, using the offline database works wonders as well.

Please make sure to check out our review of the iPhone version as the Tablet version is the exact same but enhanced for the iPad. You can purchase Euro-Japan Dict Tablet on the Apple App Store for $1.99 and is a must have application to have if you are traveling to Europe or Japan.