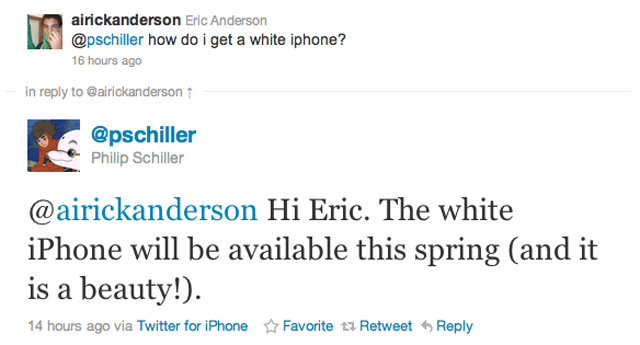 Hey guys, some breaking news hitting us this morning. It looks like Phil Schiller has let out some news. It appears that he has stated that the white iPhone will come “this spring”. However, I don’t think he’s referring to the iPhone 4. Why? 2 reasons.

The first, he never said iPhone 4. He just said “iPhone”. Phil Schiller is the SVP of World Product Marketing at Apple, he has to use the correct names for the devices, so why not in this instance? Sure, it could be because he was on Twitter, but remember, this is Apple we’re talking about.

He had to get approval to say this in a public medium.

Anything is possible, but it seems weird that he didn’t say “iPhone 4” seeing what he does at Apple.