Magnificent new display, incredibly thin, 0.71 inches thin (about the same as the Macbook Air), and just 4.46lbs. This new line has a retina display 15.4″ across with a pixel density of 2880×1800. Higher contrast ratios, deeper blacks, great angle of view and glare reduced by 75% on glossy screen. This is the World’s highest resolution notebook display. It has up to 16Gb of ram and 768GB of flash SSD storage. 7 hours of battery life, USB 3.0, Thunderbolt, HDMI, and an SD slot.

The all-new MacBook Pro started with a blank slate — without the constraints of legacy technology. That gave us the freedom to imagine something radical, something entirely different. A notebook so thin, so light, and so powerful. A notebook designed for the future, but ready to use today.

It may be incredibly thin and light, but the all-new MacBook Pro is also incredibly powerful. To achieve all that in a single design required relentless focus and a willingness to make bold decisions. Every millimeter was designed, engineered, built, and assembled to the most exacting performance standards. Bulky legacy technologies like the spinning hard drive and optical disc drive were left behind in favor of newer, higher-performance technologies — all-flash storage, for example. It’s much faster and far more reliable than a traditional hard drive. And it takes up 90 percent less space. Which is one of many reasons this MacBook Pro isn’t just extremely capable, it’s extremely portable, too.

The Retina display is a breakthrough — any way you look at it. We pushed the limits of technology to create a pixel density so high, you can see everything you’re doing with perfect clarity and make edits with pinpoint accuracy. Not only is it the highest-resolution display ever on a notebook, it has a new, more integrated design that achieves a level of fit and finish never before possible. This Retina display doesn’t sit behind a layer of glass, it is the glass. Which means you get all the benefits of a state-of-the-art display — vibrant colors, high contrast, and wide viewing angles — with very little glare. So there’s more to see, and even less to distract you from your work.

We designed every aspect of the all-new MacBook Pro with performance in mind. From the beginning, the entire internal structure was built to house the very best high-performance components: all-flash storage, the latest quad-core processors, powerful discrete graphics, massive amounts of memory. Yet despite packing such an enormous amount of power into such a slim design, we still achieved an astonishing 7-hour battery life.2 We also found a way to integrate the highest-quality speakers we’ve ever designed for a notebook. And we engineered a new cooling system that draws in air from three sides of the notebook. Alone, each of these elements is an incredible accomplishment. Together, they make this MacBook Pro the world’s most advanced notebook.

Designing from the ground up meant completely rethinking which ports belong on a high-performance notebook. The all-new MacBook Pro features the fastest, most advanced I/O technology available. And it’s the first notebook ever to include two Thunderbolt ports, two USB 3 ports, and an HDMI port — giving you the flexibility to connect multiple external displays, an HDTV, and other high-performance devices. Without a traditional optical drive, there’s room for ports conveniently located on both sides of the notebook. We even created a new, slimmer MagSafe 2 port to accommodate its thin, sleek design. So you can take this notebook anywhere. And be ready for anything.

The all-new MacBook Pro is the result of an obsessive focus on detail. Apple designers and engineers worked closely together to craft every single piece that went into making it — the fans, the vents, the speakers, the noise-reducing microphones, the screws, even the machining of the thumb scoop. Everything was considered, and nothing overlooked. Because when a notebook becomes this advanced, every nanometer counts. 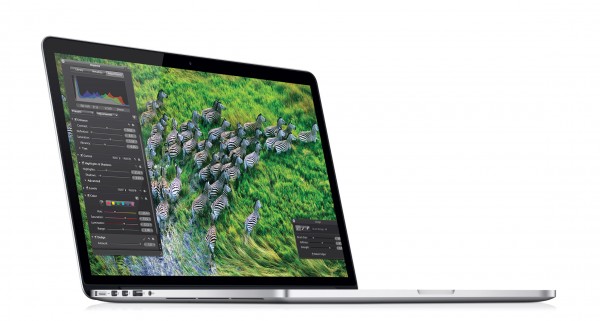