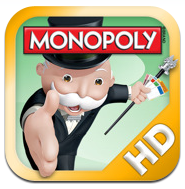 Finally, after almost a year since the iPad has been released, Monopoly with HD graphics is available.  Monopoly is my favorite game of all time and we have played countless games on the iPad using the iPhone version which gets scaled up. It doesnt look pretty but the fun factor is still there.

Now Monopoly has been released on the iPad with updated graphics.  This should have and would have been the first app to download on the iPad. As with most HD iPad games the price is a bit steep. It would be nice to start seeing some of these games in the $4.99 range.  With the price at $9.99 it is still a must buy app. Monopoly is one of the greatest board games of all time even though it brings out the worst in people.

Monopoly for iPad makes the game go by much faster and is also harder for people to cheat. I know what game I will be playing all weekend!

You can download Monopoly for iPad on the AppStore for $9.99

NOW IT’S “GO” TIME ON iPAD™! Play the game you know and love in an ALL-NEW VERSION fully designed for sleek and fast fun on iPad. From Mediterranean and Baltic to Boardwalk and beyond, enjoy a wealth of new ways to play with friends – or friendly computer opponents!

EXCLUSIVE iPAD FEATURES INCLUDE…
• NEW! Tabletop Mode – Gather friends and family around the iPad and use customizable House Rules
• NEW! Teacher Mode – Play against the computer and get tips and tricks to help you strategize in future games
• Enhanced HD-quality graphics – iPad delivers a visually rich experience with striking animated elements…It’s just a lot of fun!

GET “GOING” IN MULTIPLE MODES OF MONOPOLY PLAY
In Play Now mode, jump right into gameplay with up to 3 other players. Or take on in-game computer opponents featuring 4 levels of difficulty (Very Easy, Easy, Medium, and Hard). Also connect multiple devices to play with up to 4 players via local WiFi or Head-to-Head via Bluetooth! And yes, you can play multiplayer games with friends that have MONOPOLY for iPhone® & iPod touch®! (Just note that if you go against a player with an iPhone or iPod touch, you’ll be playing the iPhone/iPod touch version of MONOPOLY.)

EARN A COMPETITIVE EDGE IN TEACHER MODE
Play a single-player game against a quirky computer competitor. Get helpful hints and tips that pop up throughout the game. Improve your gameplay and discover new strategies. Even experienced players could learn a thing or two!

MONOPOLIZE FRIENDS & FAMILY IN TABLETOP MODE – AN iPAD EXCLUSIVE!
The signature mode of MONOPOLY for iPad, Tabletop mode lets you play up to 3 other players in an immersive interactive equivalent of the classic board game. For example, with iPad, the board stays put while the interface automatically rotates to face the current player – and that’s just for starters!

CHOOSE YOUR OWN HOUSE RULES
A variety of new House Rules are available to give you more gameplay depth and style. Allow one-time use of “sleight of hand” tactics like loaded dice and property grabs to make games even more exciting. Hey! Just sayin’!

MONOPOLY IS COMPLETE FUN ON iPAD – YOU CAN EVEN ANALYZE THE DICE DATA!
From Marvin Gardens and Water Works to Park Place, own and manage the famous holdings of the MONOPOLY board, which comes to life like never before with sensational graphic quality, plus whimsical music and sound . Even get end-of-game stats like the all-new Dice Stats. See how often each number is randomly rolled in individual games or over the life of your MONOPOLY for iPad game!