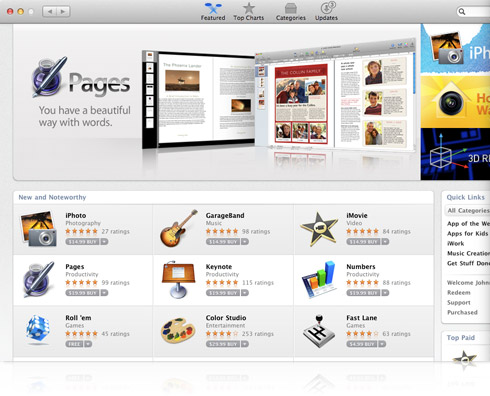 Hey guys, looks like Apple may be getting ready to launch the Mac App Store a tad early. Apple had said that they were going to launch it within the next 90 days and reports say that Steve Jobs wanted the store to launch a little sooner than that, so the new projected launch date is for December 13th.

Here’s what the source had to say:

“Apple is targeting a Monday, December 13th launch of the Mac App Store. The company apparently told developers to have their software prepared for a launch as early as Monday the 6th of this month. Apple has made no official announcements regarding this, and delays could always happen, but there’s a push to be launched before Christmas, well ahead of the previously estimated January release.”

Sources say that Steve Jobs had wanted the Mac App Store to be finished by December 6th (yesterday), but looks like they couldn’t meet that date.

This makes complete sense, they want to get the Mac App Store out in time for the holiday season and Mac OS X 10.6.6 has even reached “Gold Master” status, the only thing missing is the actual application so that people can download apps.

Apple has been recieving entries for the Mac App Store for about a month now, so this would make sense. They have the apps, they have Mac OS X 10.6.6 ready, and all they need is finish off some last minute things with the actual store.