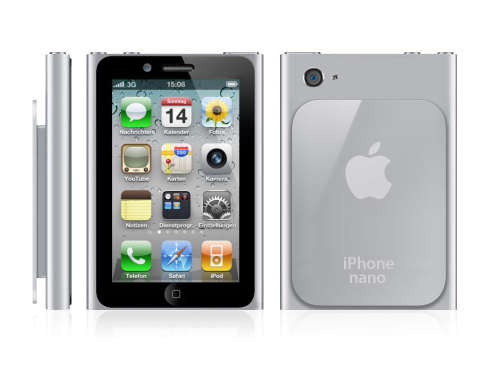 Hey guys, well, it has been a couple days since we posted (this is due to several reasons, mostly on stuff that we will be announcing very soon, also, we have been tweaking the new site design with little things that I believe will make it look better than it already does).

Anyways (more on that later), rumors coming out yesterday and today suggest that we will be seeing an iPhone Nano this Summer. Wait, what? Yep. The rumor that just won’t die (like the Apple tablet rumor or the Verizon iPhone rumor which we all know didn’t ever materialize, right?).

So, what are sources saying about this mythical new iOS based device? Well, people familiar with the prototype and Apple plans say that Apple is going to announce and release 2 iPhones this Summer and one of them will be “screen from edge to edge”.

This little part of the information that we received is what grabbed my attention. Previous rumors said that the screen would be smaller, which I would not think would be very Apple-like. Having a full sized 3.5 inch screen with no bezel and relocated speaker would make more sense to me. Also, in iOS 4.3, the new multi-touch gestures would make more sense on this new device seeing as the home button would most likely disappear.

Not only that, rumors from late 2010 suggested that Apple was going to release an iPhone that lacked a home button, so this rumor could be a build up from that, as well as the iPod Nano and that new user interface that didn’t need a home button. Think about it. It all adds up.

Next, sources are saying that the new “iPhone Nano” will lack internal storage in favor of a cloud based ecosystem and network that it would connect to. The reasoning given for this piece of information is that the NAND Flash Memory is the most expensive component of the iPhone and iPad today. Sources are not sure whether an App Store would be possible, but if you look at iOS 4.3 and the possibilities with that on Apple TV and streaming apps, it’s easy to imagine the same thing would work with the iPhone Nano.

Also, they are saying that the iPhone Nano will be a universal iPhone. Both GSM and CDMA, unlocked to any carrier, and would use the Qualcomm chip that is in the Verizon iPhone. Only difference would be that Apple would actually put in a micro-SIM tray into the device so it was truly a “world phone”.

This leads into my final, and most important, piece of information that I want to share, sources are saying that Apple will be making this a $199 iPhone. What’s the difference between this and what we have now? The $199 is unsubsidized, no contract required. So basically, you would purchase this just like any iPod or pre-paid phone at your local electronics store or super market. This is HUGE. If you try to buy an iPhone 4 16GB unsubsidized it adds up to about $649.

So, do I believe that we will be seeing an iPhone Nano? Yes. Why? Android is catching up, and in some cases, even passing iOS in select markets. Apple is in this one to win it. They want something that no one else can compare to, and this just may be the thing that puts Apple back on top. I for one, will be buying this if it’s all true.