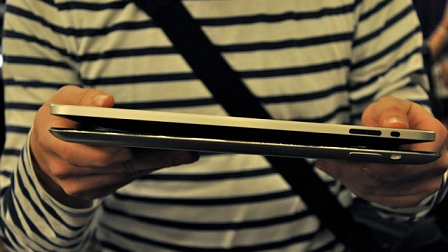 Hey guys, check this out. Looks like a case manufacturer made it to CES this year and they have not only brought “iPad 2” cases, but they have also managed to make a mock up of the device using machined (CNC Lathed) aluminum.

It’s very interesting and it was made according to what they believe to be the exact specs & dimensions of the device. As you can see, the back is that of an iPod touch. It’s thinner and more squared off in the back (possibly so it can sit on a desk better rather than spinning around).

Here’s what the case manufacturer had to say:

It [the case] was so intriguing that we asked to put our own iPad inside, which is when we were told it wouldn’t fit, since the case was designed for the next iPad. Indeed, the mockup that we found inside the case was a tad bit slimmer than the first-gen iPad, with a taper leading to the edges that reminds us of the iPod touch, and a home button positioned nearer the bottom edge. We found all the typical cutouts on the case, and their mirror on the machined mockup, including a large square for the speaker.