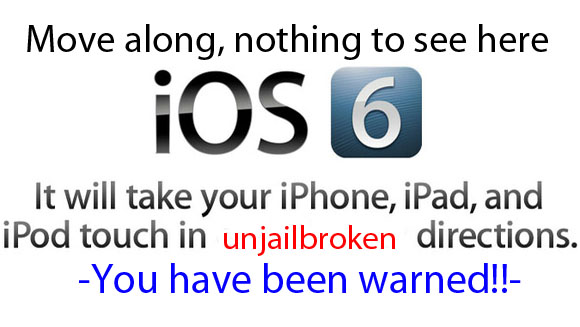 Hey guys, it’s that time of year again. Apple is set to release iOS 6 to the public tomorrow (Wednesday, Sep 9th, 2012) and as usual it’s time for the warnings ^_^

Reasons to stay away from iOS 6:

Reasons to upgrade to iOS 6:

I have to admit I’m a tad bias against this update, but most people who care about jailbreaking are too, and with the difficulty involved lately in getting user jailbreaks out, the feature set in iOS 6 is very diminished.

PS: Grab you SHSH blobs for 5.1.1 while you can. Apple will probably stop signing them by Friday. (Except for the iPad 1 since 5.1.1 is its last update)