[UPDATE] The new HotSpot feature is indeed on the GSM iPhones in iOS 4.3! screenshot below!

“Test Multi-Touch Gestures for iPad
This beta release contains a preview of new Multi-Touch gestures for iPad. You can use four or five fingers to pinch to the Home Screen; swipe up to reveal the multitasking bar; and swipe left or right between apps. We are providing this preview before releasing them to the public to understand how these gestures work with your apps. Test them and give us your feedback on the Apple Developer Forums.”

[UPDATE 3X] The iPhone 3G & iPod touch 2nd Generation will NOT be receiving iOS 4.3 or anything else.

Hey guys, looks like rumors and leaks about iOS 4.3 are 100% true. iOS 4.3 brings a bunch of new functionality.

The main new functionalities are mostly AirPlay related. Now, developers will be able to take advantage of AirPlay APIs and put them into their 3rd party applcations. 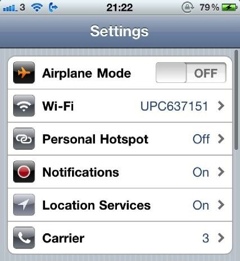