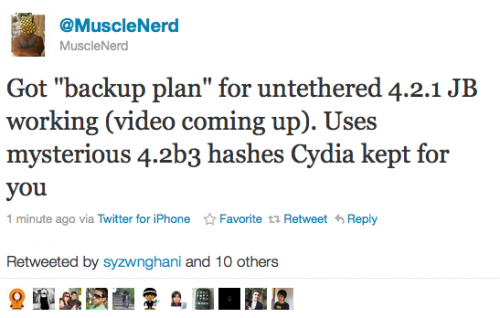 Hey guys, looks like the iPhone Dev Team has indeed 2 options for an untethered jailbreak for iOS 4.2.1. Last night, I was on Twitter when MuscleNerd tweeted that he was preparing to use the mysterious iOS 4.2.1 beta 3 kernel hack that they had been keeping a secret.

Looks like Apple had messed up with iOS 4.2.1 beta 3 in which there seems to be a vulnerability in the kernel (which also does the checks at boot of whether it’s a jailbroken or stock file system).

Now, comex is still working on his untethered exploit, but it seems that what he is working on is a more permanent solution for the future of A4 devices, so we’ll keep our eyes peeled on that.

So for everyone on iOS 4.2.1 (especially iPad users) there is good news, it’s not just Santa Clause thats coming to town, looks like the Jailbreak Train is coming as well, and it looks like they’ve cut the tether. 🙂

Here’s what MuscleNerd had to say:

Got “backup plan” for untethered 4.2.1 JB working (video coming up). Uses mysterious 4.2b3 hashes Cydia kept for you.

(It’s a “backup plan” because comex is working on a more extensible one, but this method is also generalizable)