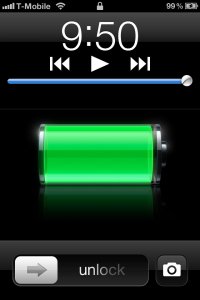 The Camera application got some really cool upgrades in iOS 5. One of my favorite features is the ability to use the volume up button to snap a picture.  This makes it so much easier to take photos now.

Another way Apple has improved the speed of taking pictures is allowing users to launch the camera app right from the lock screen.  Now when your iPhone is locked and you double tap the home button you will see a camera icon next to the slide to unlock bar. Press this and you will be snapping pictures in no time.  You will only be able to see the pictures you take in the session for security reasons. If you want to view all of your pictures in the photo album you will have to unlock your iDevice. (Note: I am not talking about the carrier unlock. I am talking about the slide to unlock!).

On a side note, another cool feature is the built in photo editing.  You can auto enhance photos, remove red eye, and crop all from the photos app now.

UPDATE: As of iOS 5.1.1 the button is always on the lock screen. Just hold it and slide up and it will take you to the camera.