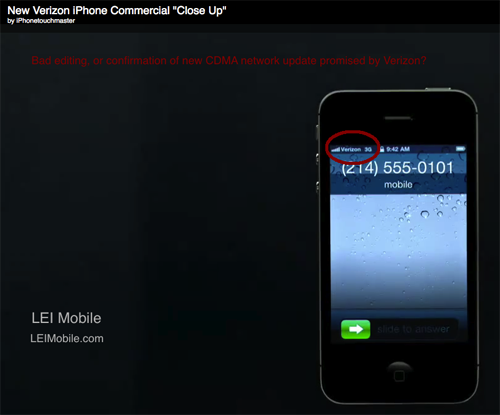 Hey guys, we just ran Verizon’s iPhone advertisement on our YouTube channel a short while ago, but when I saw the commercial, something caught my eye. Right when the phone call came in, the “3G” logo never disappeared.

Why is this significant? Well, rumors have suggested, in the last couple of days, that Verizon is working on (as well as testing) a major CDMA network upgrade that would allow for simultaneous data & voice, just like AT&T and T-Mobile’s GSM networks support.

The thing is, they aren’t just rumors, Verizon flipped the switch on the HTC Thunderbolt a few days ago so that it could run on the Verizon CDMA network and do both voice and data at the same time. In an internal memo that we dug up, this is what it said:

There is functionality in the Thunderbolt that allows simultaneous voice and date whole on the VZW 3G network, however, we cannot promise the experience will be one that is consistent with our brand. As a result, do not reference this functionality as a benefit during conversations with customers.

Neither Apple nor Verizon’s COOs acknowledged any questions that referenced the (back then) rumored existence of a full CDMA network upgrade that would allow both data and voice to run on the phone at the same time. All they said was:

“It is on par with all other CDMA phones”

“I think people place different emphasis on things — I can tell you that the number one question I’ve gotten is when will the iPhone work on Verizon. I couldn’t be happier to tell people that. They will make those sorts of tradeoffs.”

So I don’t believe that this is a mere editing flaw, I think that they may have used one of their own internal models that they are testing the network upgrade on.

February 10th is just a week away and I know that we will find out more then.

Click here to watch the Verizon iPhone commercial that I am referencing in my article by clicking here!