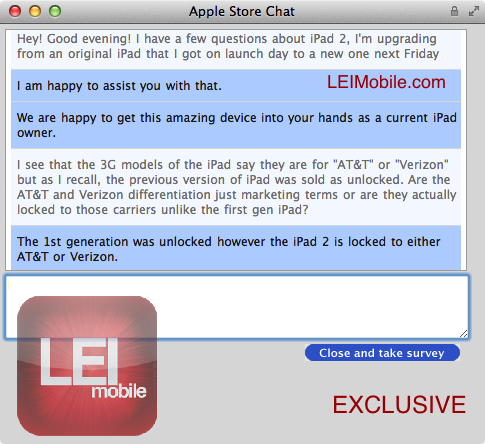 Hey guys, I have some exclusives on some information that was obtained on the iPad 2, particularly on the Wi-Fi + 3G version. Now, it seems that Apple will not be allowing the iPad 2 to roam free. Now, I was curious to see whether the separate iPad 2 (CDMA & GSM) models that were labeled as AT&T or Verizon were just marketing terms or actual facts.

Now, according to Apple, they are in fact locked to AT&T & Verizon respectively. This is a bummer for those who got the first generation iPad. The first generation iPad was unlocked and could be used on AT&T or T-Mobile here in the U.S. but it looks like Apple has struck a deal with AT&T and Verizon to keep it exclusive.

So, relatively low key information, but we are glad that we have confirmation as to whether people will be able to use their iPad 2s on any carrier they wanted, unfortunately, the answer to that question is a resounding “no”.

It seems like we may not see an unlocked iPhone 5 this summer if this trend continues, I wanted Verizon to get the iPhone so that Apple could break their exclusivity with AT&T and get the device unlocked like in Canada, but the opposite happened. Now Verizon & AT&T have exclusivity, but on CDMA and the GSM models.