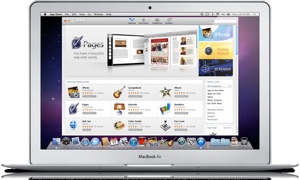 Hey guys, it’s official, Apple is set to launch the Mac App Store on January 6th! Apple has sent out a press release moments ago, so get your back ups done and clean up your dock because, most likely, Mac OS X 10.6.6 will be released along with the store!

CUPERTINO, Calif.—(BUSINESS WIRE)— Apple® today announced that the Mac® App Store? will open for business on Thursday, January 6. By bringing the revolutionary App Store experience to Mac OS® X, the Mac App Store makes discovering, installing and updating Mac apps easier than ever. The Mac App Store will be available in 90 countries at launch and will feature paid and free apps in categories like Education, Games, Graphics & Design, Lifestyle, Productivity and Utilities.

“The App Store revolutionized mobile apps,” said Steve Jobs, Apple’s CEO. “We hope to do the same for PC apps with the Mac App Store by making finding and buying PC apps easy and fun. We can’t wait to get started on January 6.”
The Mac App Store lets you browse new and noteworthy apps, find out what’s hot, view staff favorites, search categories and read customer ratings and reviews. Like on iPhone®, iPod touch® and iPad™, you can purchase, download and install apps in just one click and start using them immediately. Purchased apps can run on all of your personal Macs and updates are delivered directly through the Mac App Store so it’s easy to keep all of your apps up to date. The Mac App Store is available to Mac OS X Snow Leopard® users as a free download through Software Update.

Mac developers set the price for their apps, keep 70 percent of the sales revenue, are not charged for free apps and do not have to pay hosting, marketing or credit card fees. To find out more about developing for the Mac App Store visit developer.apple.com/programs/mac.
Apple designs Macs, the best personal computers in the world, along with OS X, iLife, iWork, and professional software. Apple leads the digital music revolution with its iPods and iTunes online store. Apple is reinventing the mobile phone with its revolutionary iPhone and App Store, and has recently introduced its magical iPad which is defining the future of mobile media and computing devices.