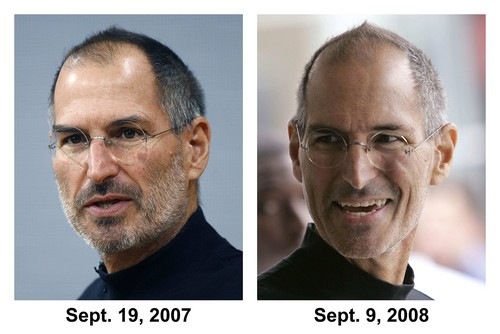 [UPDATE] Hey guys, we have it from an internal source that Steve Jobs is suffering from complications associated with the liver transplant. Here is what the source said:

Mr. Jobs suffers from immune system issues common with people who have received liver transplants and, as a result, his health suffers from frequent “ups and downs,”.

In recent weeks, Mr. Jobs began a down cycle and slowed his activities at Apple, Mr. Jobs has been coming to the office about two days a week, and appeared increasingly emaciated. He frequently lunched in his office, rather than in the company cafeteria.

Hey guys, we have some breaking news hitting us just moments ago. it seems that Apple CEO and Co-Founder, Steve Jobs, is taking another medical leave of absence from Apple. It is unclear why he has taken his leave of absence, but now it is clear why he was not at the Verizon event and why the rumor suggested something was wrong with Steve Jobs.

We are sure that details will be leaked in the coming hours as to why he is taking another medical leave.

Tim Cook, Apple COO, will be taking over day to day operations once more, as he did in 2009 after details of a liver transplant surfaced.

We all wish Steve Jobs good luck with whatever he is ailing from and we wish him a speedy recovery, and we hope his family is doing fine.

Steve Jobs sent out a memo today to everyone at the company saying this:

At my request, the board of directors has granted me a medical leave of absence so I can focus on my health. I will continue as CEO and be involved in major strategic decisions for the company.

I have asked Tim Cook to be responsible for all of Apple’s day to day operations. I have great confidence that Tim and the rest of the executive management team will do a terrific job executing the exciting plans we have in place for 2011.

I love Apple so much and hope to be back as soon as I can. In the meantime, my family and I would deeply appreciate respect for our privacy.