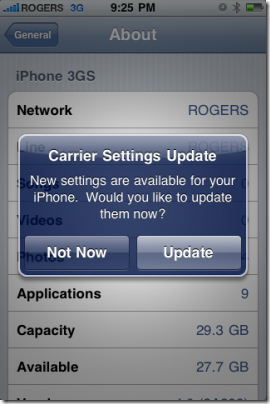 UPDATE 2: Looks like a lot of us fell for “Alpha”‘s “leak”. Many websites were fed the same story, but MuscleNerd has said that there is no “Over-The-Air-Relocking” code in the baseband, but says little else. Is it possible that this really is true? I’m not sure either way.

Everyone who got tipped off of “Apple’s secret plans” also believes that this info is true, but if MuscleNerd (a respected member of the iPhone Dev Team) says theres nothing like that, then I am inclined to believe him. He also debunked their downgrading procedures and has said that you will recieve iTunes error 1015 if you do this as described.

However, remember the Apple killswitch last year? The one that was discovered by someone else entirely who was also tipped off? Well, that turned out to be absolutely true and you can disable Apple’s not-so-secret-anymore switch from SBSettings today.

The situation today and from last year was very similar, so that’s why I still theres a chance this may be (even one day) the case.

UPDATE: If this “leak” is untrue, I appologize for this. This seemed highly credible, we all make mistakes, and I do appologize, I thought this to be true, however, this doesnt mean that they may not do this at some point or have considered this. This just brings up the issue of privacy and Apple’s limits once more.

We will see if this is fake or not in 2 weeks time. There is a task on the iPhone that hasn’t been proven to do or not to do anything. It’s called “daily”. No one knows what it does.

I hope i was wrong, but just keep an eye out. If it is fake, all I can ask is that u forgive me. I wanted to spread the word as soon as I could because this seemed credible enough to post.

I think we all secretly think Apple is doing these things in the background with no knowledge.

If MuscleNerd is right, I deeply appologize. I’m stressed about this too. I breathed a sigh of relieve when MuscleNerd said this but the info provided was just so perfect and believeable.

However, this happens in our field. Rumors get started, ones that seem so true and sophisticated that they can make us believe that they are credible.

I hope I didn’t ruin my 3 years of work and soiled your beliefs in me and how accurate I and LEI Mobile is.

Again, I am very sorry for this. It was an honest mistake, but I had my reasons for believing it myself.

Well we have just received some information from inside Apple. An Apple engineer, which wishes to be named as “Alpha”, has disclosed some pretty disturbing secrets of the iPhone 4 and iOS 4. Now, the following information is very disturbing to me.

The following are some secrets that the iPhone 4 and iOS 4 hold:

1) iOS4 has code which sends updates to the user every 1-2 weeks and locks their system if they are not using AT&T as their carrier.

2) Apple can check users’ baseband and carrier information and also see whether or not they are jailbroken when they call Apple Care Support. Apple can also void users’ warranty once they find out if they have jailbroken iOS 4.

4) Apple employees who are aware of the situation have downgraded to iOS 3.1.3 because they are afraid of what’s going on.

Here’s what he said:

As far as Base Bands go it does not matter what baseband you TRY to get on the iPhone cause in the iOS4 there is a line of code we wrote that stands for OAU also known as “Over Air Updates”. How it works is every 7 to 14 days We (Apple) and AT&T send a message to your iPhone that gathers some data from your iPhone without you knowing and we see what is running, baseband and firmware. We then send a following message. “There are optional updates for your iPhone, Would you like to install them now?” two options “Yes” or “Later”. Those are what we would call “OPTIONAL UPDATES” Now there are things called “MANDATORY UPDATES”. They tend to work the same way, grab data from the iPhones sends it to AT&T and us then back to your iPhone with the message, “Your iPhone (name of iphone) must be updated to the current AT&T standards to run”, your only option is to “Accept” Now you can try to work your way around it until you get the second mandatory message again “You must plug iPhone into iTunes and update” If you don’t do this you will then receive no Signal from the network anymore and your iPhone will potentially lock up with no signs of use until you update your iPhone via iTunes. You all agreed to this terms and condition when you installed iTunes 9.2 and then again once you updated to iOS4.

He goes on to say:

The reason why I am leaking some of this info is cause I don’t think its right that we are essentially controlling peoples iPhones.

Its their property once it leaves our retail stores and people need to know what they are getting into.

This is scary to me. I am on iOS 4. I am calling to the iPhone Dev Team to figure this out. This is insane. Just like they killed Apple’s killswitch, I’m sure they can figure this out as well.

Also, Alpha goes on to say why some iPhone 4s were sent to users early. This was in a chat with him:

He goes on to talk about downgrading and Apple employees not updating: 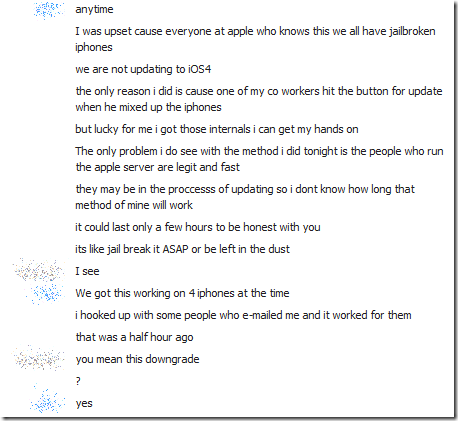 He also goes on to say the following on why he can’t disclose how to stop this:

if you plug in a flash drive to any MAC in our building within 30 seconds people will show up there and stop you. Also you will be terminated on the spot.

This is the most frightening thing I have had to write in my 3 years of being here at LEI Mobile and Limited Edition iPhone. I am freaking out. This is insane. Spread the word as fast as you can. We have 7-14 days to stop this.