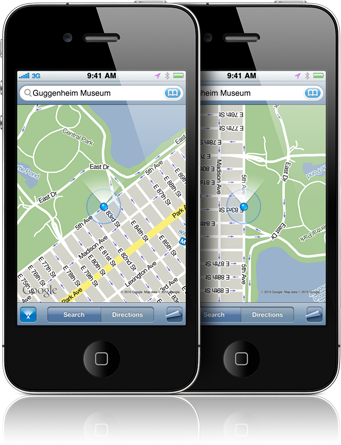 More breaking news hitting us this morning, at the same time that Apple released the white iPhone 4 news, they also took the time to issue the press a statement regarding the, highly publicized scandal in which we were the first to dub (and then others followed :P), locationgate.

Apple answered every question the media (and senator Al Franken) had to ask Apple. Basically, Apple is not tracking you (specifically), but they use that data in order to make location services faster. They are tracking Wi-Fi hotspots and cellular towers around you, not you, per-say.

They also say that there will be a free iOS update in the next “few weeks” to address the locationgate issues of making the cache smaller and preventing it from being backed up in iTunes, as well as finally turning the services off when “location services” is turned off, which will bring better battery life. However, they say that the data will not be encrypted until “the next major iOS release”, AKA, iOS 5 (or, even iOS 4.4).

Here’s what Apple had to say:

CUPERTINO, Calif.–(BUSINESS WIRE)–Apple would like to respond to the questions we have recently received about the gathering and use of location information by our devices.

2. Then why is everyone so concerned about this?
Providing mobile users with fast and accurate location information while preserving their security and privacy has raised some very complex technical issues which are hard to communicate in a soundbite. Users are confused, partly because the creators of this new technology (including Apple) have not provided enough education about these issues to date.

4. Is this crowd-sourced database stored on the iPhone?
The entire crowd-sourced database is too big to store on an iPhone, so we download an appropriate subset (cache) onto each iPhone. This cache is protected but not encrypted, and is backed up in iTunes whenever you back up your iPhone. The backup is encrypted or not, depending on the user settings in iTunes. The location data that researchers are seeing on the iPhone is not the past or present location of the iPhone, but rather the locations of Wi-Fi hotspots and cell towers surrounding the iPhone’s location, which can be more than one hundred miles away from the iPhone. We plan to cease backing up this cache in a software update coming soon (see Software Update section below).

5. Can Apple locate me based on my geo-tagged Wi-Fi hotspot and cell tower data?
No. This data is sent to Apple in an anonymous and encrypted form. Apple cannot identify the source of this data.

6. People have identified up to a year’s worth of location data being stored on the iPhone. Why does my iPhone need so much data in order to assist it in finding my location today?
This data is not the iPhone’s location data-it is a subset (cache) of the crowd-sourced Wi-Fi hotspot and cell tower database which is downloaded from Apple into the iPhone to assist the iPhone in rapidly and accurately calculating location. The reason the iPhone stores so much data is a bug we uncovered and plan to fix shortly (see Software Update section below). We don’t think the iPhone needs to store more than seven days of this data.

7. When I turn off Location Services, why does my iPhone sometimes continue updating its Wi-Fi and cell tower data from Apple’s crowd-sourced database?
It shouldn’t. This is a bug, which we plan to fix shortly (see Software Update section below).

9. Does Apple currently provide any data collected from iPhones to third parties?
We provide anonymous crash logs from users that have opted in to third-party developers to help them debug their apps. Our iAds advertising system can use location as a factor in targeting ads. Location is not shared with any third party or ad unless the user explicitly approves giving the current location to the current ad (for example, to request the ad locate the Target store nearest them).

Sometime in the next few weeks Apple will release a free iOS software update that:

In the next major iOS software release the cache will also be encrypted on the iPhone.