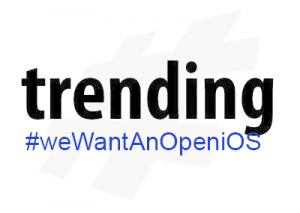 Pod2g, renowned iOS hacker, has started a movement on Twitter with one simple message to Apple. “We want an open iOS!”

This trend is currently on Twitter’s top 15 worldwide trends, and they don’t intend to stop there. This trend has gained such momentum a twittition, a petition of sorts, is being passed around in a hopes that we might get Apple to give users more access to the devices they pay so much money for.

If you support jailbreaking of iOS devices, or any for that matter, join in on Twitter. Maybe, just maybe we can get some response from Apple to allow such access to their devices.

Tweet what you do with your iOS device using #weWantAnOpeniOS