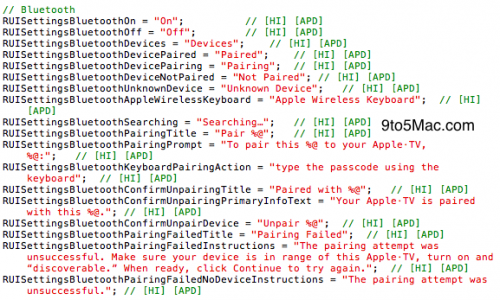 iOS 5 just keeps getting better and better. After jailbreaking Apple’s little black box, developers discovered references to the Broadcom chip’s bluetooth capabilities in the Apple TV in the latest beta of iOS 5, iOS 5 beta 3. As we noted when the iOS 4.3 betas dropped on the Apple TV, references (that we believed to be related to a “gaming console”) were found buried in the OS.

You can read that article here!

So, this latest code references the wireless keyboard that Apple sells. So, why would Apple need a keyboard for Apple TV? To enter in a few passwords? A YouTube search? No, I believe that Apple is working on bringing Safari to Apple TV in order to better compete with Google and Google TV, seeing as Google TV will be transitioning to Android 3.2 as the OS of choice this Summer.

I guess it will all be revealed in the Fall, a year after Apple first introduced the 2nd generation Apple TV.