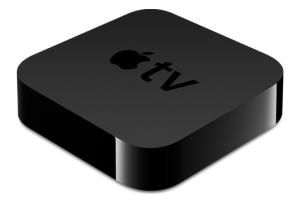 Hey guys, looks like the Apple TV is becoming a little more appealing to consumers because Steve Jobs’ favorite “Hobby” is about to sell it’s 1 millionth unit! That’s great! Now, why does this matter? It makes for a bigger market and a more viable market for content distribution and possibly application development.

The Apple TV could finally catch enough attention to make it a more application centric device (if it hasn’t already been thought up as one inside of Apple). I believe that Apple will do so at some time, it makes sense given that it’s an iOS device, it has 8GB of flash memory, 256MB RAM, and an A4 processor.

I believe that it would be stupid not to add functionality. Google is the target, not Roku, Apple has Roku beaten now, but they will have to go even more to beat Google in the TV space.

I have a Google TV (Logitech Revue) and it has a ton of functionality that I only dream would be on Apple TV. Hopefully Apple has seen that not just a $99 will win the war against Google.