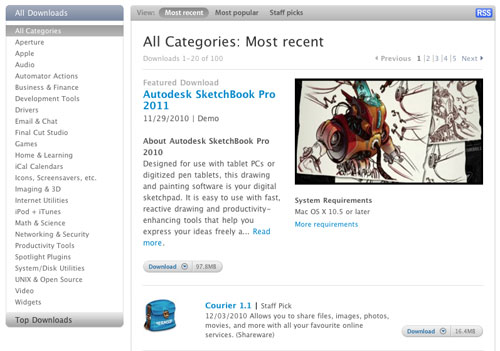 Hey guys, looks like Apple is finally going to kill it’s downloads section of apple.com on January 6th. Apple had removed the “Downloads” listing on the main site when iPad was introduced, but now that the Mac App Store is about to take off, it seems that apple.com may get a new tab or move some stuff around.

So for all of you apple.com/downloads fans, this is your last chance to get your downloads in. I for one visited that site quite a bit when I got my Mac, but it looks like Apple is set to move on. This begs the question, are widgets dead? This seemed to be the only place to get widgets in an efficient manner.

We hope to learn more soon, but in the meantime, this is what Apple had to say:

“Thank you for making the Mac OS X Download site a great destination with apps that offer users new ways to work, play, learn, and create on their Mac.

We recently announced that on January 6, 2011, the Mac App Store will open to users around the world, presenting you with an exciting, new opportunity to reach millions of customers. Since the introduction of the App Store in 2008, we’ve been thrilled with the incredible support from developers and the enthusiastic response from users. Now we’re bringing the revolutionary experience of the App Store to Mac OS X.