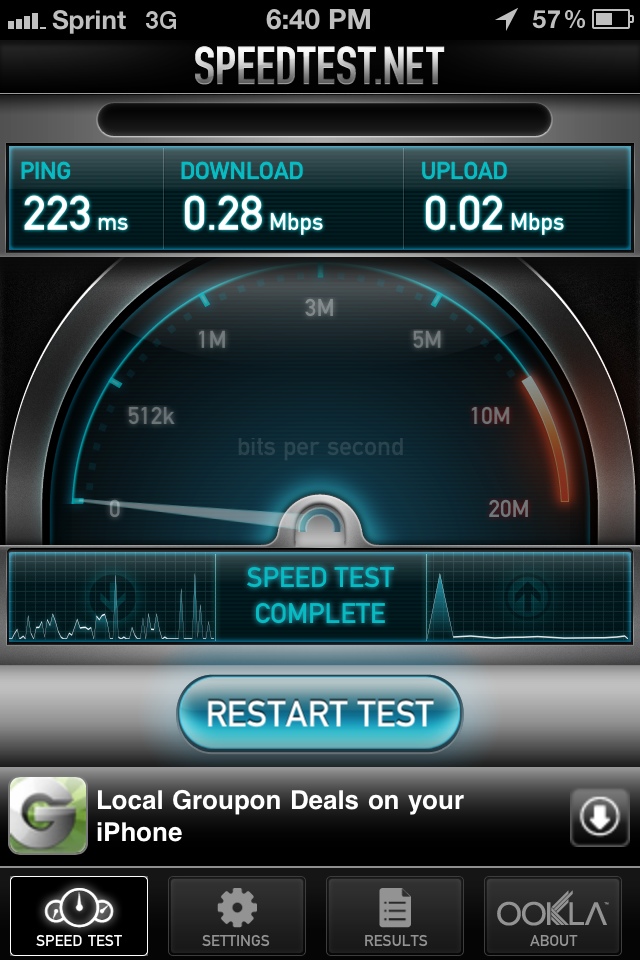 LEI Mobile can now confirm that the Sprint iPhone 4S is indeed seeing a nationwide slow down. I have an iPhone 4S on Sprint as well and I have noticed extremely slow speeds, only going at about 0.50mbps down and an atrocious 0.10mbps up, at the most since I bought my iPhone 4S on launch day.

The screenshot, above, is a speed test I did on my own iPhone 4S (at the time of this writing) to show you that this is not a hoax or just people complaining about nothing, this issue is indeed real.

Now, as we know, AT&T has the fastest 3G network and us Sprint customers shouldn’t expect insanely fast speeds like 7mpbs or anything, even Verizon is a lot slower, about half as fast as AT&T. However, 0.28mbps up/0.02mbps down is unacceptable. I’ve tested other Sprint devices and they have gone up to 2mbps, so after the update, I want to at least see 1.2mbps all the time.

I do believe it could be an issue with the PRL/APN that the iPhone 4S is currently using for Sprint, but Apple and Sprint should hurry up because every day that goes by, people WILL notice and people will make a fuss like they did with AT&T when they used to have the horrible coverage back in 2007/2008.