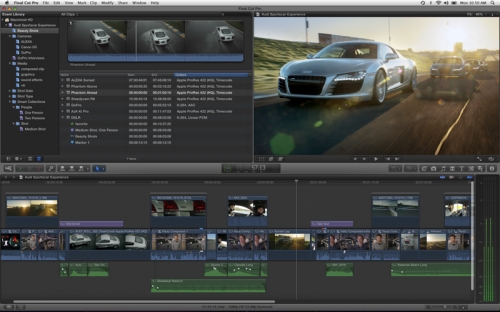 It seems as though Apple has been very busy today (and we expect a couple more announcements today). It seems as they have finally released Final Cut Pro X and two other apps that make the full Final Cut Pro experience happen, Motion 5 & Compressor 4.

The change logs are after the jump!

Revolutionary Video Editing
• Assemble clips in the Magnetic Timeline without clip collisions or sync problems.
• Use Clip Connections to attach B-roll, sound effects, and music to the timeline.
• Reduce clutter by grouping clips into a Compound Clip. Easily expand it back to single clips.
• Perfect your pacing right in the timeline with the Inline Precision Editor.
• Cycle through different shots, graphics, or effects at one place in the timeline with Auditions.

Powerful Media Organization
• Import a broad range of formats including native AVCHD, H.264 from DSLRs, and more.
• Content Auto-Analysis captures camera metadata and analyzes shots in the background.
• Choose analysis options for stabilization, rolling shutter correction, and audio enhancement.
• Create and apply custom keywords on the fly as you select ranges in clips.
• Smart Collections let you dynamically organize content and find any shot in a few clicks.

Incredible Performance
• New 64-bit architecture uses all the RAM in your system for larger projects and richer effects.
• The Cocoa foundation makes Final Cut Pro more responsive, interactive, and fun to use.
• Final Cut Pro taps the GPU on the graphics card and all the cores in your Mac for speed.
• Background processing lets you keep working without interruption.
• A ColorSync-managed color pipeline produces accurate, consistent color across applications.

Compelling, Customizable Effects
• Preview effects to see how they look with your footage before applying them.
• Change the look of titles, transitions, and effects using intuitive controls.
• Control effects with precision using a keyframe editor that appears directly in the timeline.
• Adjust the Ken Burns effect with simple onscreen arrows for start and end points.

Intuitive Color Grading
• Improve the look of any clip with the single-click Balance Color feature.
• Apply the Match Color feature to match the looks of two clips shot under different conditions.
• Manipulate color, saturation, and exposure with the Color Board.
• Fine tune color for a specific color range or area of the screen using keying and masks.

One-Step, Optimized Output
• Export projects to Apple devices and websites such as Vimeo, YouTube, and Facebook.
• Add your content to a set of themed menus, then burn a DVD or Blu-ray disc.
• Output files for HTTP live streaming in a single step.

Here’s the changes for Motion 5:

Editor-Friendly Design Tools
• Work fast using a single-window interface with a familiar look and feel.
• Customize Final Cut Pro titles, effects, and transitions by opening them in Motion.
• Create Smart Motion Templates with simple controls for making changes as you edit.
• Build stunning 2D and 3D compositions with more than 1900 Apple-designed elements.
• Make adjustments to any parameter during playback and instantly see results.

Easy Animated Text and Titles
• Design dramatic text effects with complete control over position, opacity, rotation, and more.
• Animate text instantly by choosing from more than 200 text behaviors such as Type On.
• Build a credit roll by importing a text file; the Scroll behavior optimizes the speed for you.
• Move, scale, or rotate a single character with the Adjust Glyph tool.
• Ripple text one character, word, or line at a time with the Sequence Text behavior.

Stunning Effects
• Choose from more than 230 behaviors for natural-looking motion without programming.
• Enhance your 2D or 3D animations with more than 130 filters using the FxPlug 2 standard.
• Track a moving object in a video clip with the point tracking and match move feature.
• Create an accurate chroma key in a single step with the new Keying filter.
• Apply the Linking behavior to make parameters for one object animate related objects.
• Use SmoothCam to eliminate camera jitters, and image stabilization to smooth bumpy shots.

Effortless 3D
• Transition from 2D to 3D space by adding a camera or cameras to any 2D project.
• Set up realistic shadows that animate dynamically with the movement of cameras and lights.
• Turn any shape, video plane, or paint stroke into a reflective surface.
• Highlight or de-emphasize various objects by defining a range of focus.
• Track objects or groups of objects with the Camera Framing behavior.

Quick, High-Quality Output
• Export projects to Apple devices and popular websites such as Vimeo and YouTube.
• Choose to output the ProRes 4444 format for uncompressed quality at small file sizes.

Here’s the changes for Compressor 4:

Time-Saving Encoding Workflow
• Experiment freely with encoding options, using real-time feedback in the Preview window.
• Find exactly the setting you need in just a few clicks in the updated settings library.
• Set up batch processes to streamline the encoding of large numbers of files.
• Build batch templates to combine encoding with tasks such as moving or copying files.
• Create self-contained Droplets to encode on the desktop with drag-and-drop ease.

Industry-Standard Encoding Support
• Use one-step settings for Apple devices and websites such as Vimeo, YouTube, and Facebook.
• Work with a choice of themed menus to encode and burn a DVD or Blu-ray disc.
• Add chapter markers for discs or podcasts distributed on iPad, iPhone, iPod, or Apple TV.
• Encode to a broad range of industry-standard formats, such as MPEG-2, H.264, and ProRes.
• Generate files for HTTP live streaming in a single step.
• Import Targa, DPX, TIFF, PSD, or PNG image sequences and encode them to any setting.
• Tap into advanced encoding features for adding closed captioning, metadata, and more.

Pristine Format Conversions
• Convert any file from its source format to another format, such as NTSC to PAL or SD to HD.
• Clean up and customize your content using image filters, a timecode overlay, and watermarks.
• Speed up video, slow it down, or adjust the frame rate to make the duration match a runtime.

Distributed Encoding
• Save time by distributing encoding work among multiple cores and workstations.
• Install Compressor on any Mac to activate it as a cluster node for distributed encoding.
• Speed up encoding in Final Cut Pro by choosing a Compressor cluster for output processing.
• Activate QuickCluster for dynamic configuration of nodes based on available resources.

You can find all of these apps on the Mac App Store now!