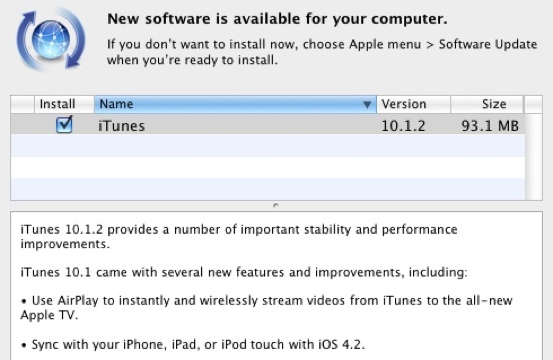 Hey guys, looks like Apple has just released an iTunes update. iTunes 10.1.2 was released today and Apple only specified the following:

“iTunes 10.1.2 provides a number of important stability and performance improvements.”

After digging around in the documentation, we actually found that it allows syncing with Apple’s Verizon iPhone.

“iTunes 10.1.2 syncs music, movies, and more with iPhone 4 (CDMA model) and provides a number of important stability and performance improvements.”

Also, it is basically saying that it will allow syncing with iOS 4.2.5 (as showed at the Verizon press conference models, or it could bring update iOS 4.3 beta 3 support for anothe beta that Apple could be preparing for us today.

Last week, Apple surprised us with 4.3 beta 2 just 7 days after the first beta was launched. Today is Thursday, so it has been 7 days since then, we may see another beta today or tomorrow if the pattern continues.

Go ahead and update iTunes with Software Update!