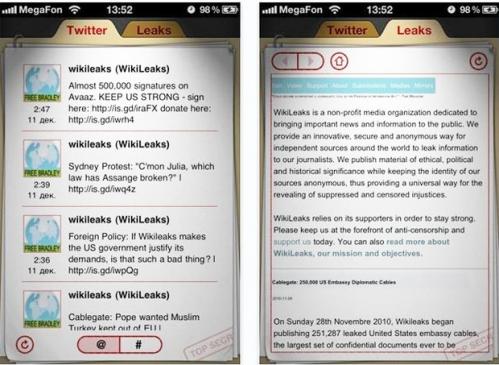 Hey guys, unless you’ve been living under a rock for the past few weeks, you would have know that since Wikileaks released confidential diplomatic cables, many companies have given them the cold shoulder.

However, this morning, Apple pulled the “Unofficial Wikileaks” application from the App Store. Now, they didn’t give a reason, but if it were up to me, I would say that it was because they were selling content that is free to the web (and this content is highly seen as a big “no no” by the US Government). The app was selling for $1.99 but the developer claims to have been donating $1.00 of it to Wikileaks, factor in Apple’s 30% cut, and you’re left with about $0.40 for the developer.

Not too bad (if they were doing as they said). Apple has not yet commented on the pulling of the application, but we’ll have more info as we get it. 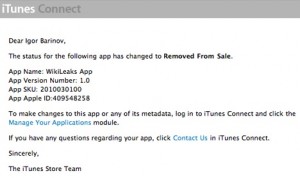 Here’s what the developer had to say:

Basically the paid app was selling WikiLeaks content (available for free) for $1.99. Its entry into the app store on December 17th was actually surprising, as Apple is usually quite strict and somewhat vague about its app approval standards. WikiLeaks and founder Julian Assange are quite controversial, to put it lightly but I’m not sure if the app directly violated anything in Apple’s TOS.

In the past couple of weeks corporate biggies Amazon, PayPal, Mastercard, Visa and Bank of America have all tried to disassociate themselves in one way or another from WikiLeaks. If this isn’t some kind of glitch, Apple has plenty company.