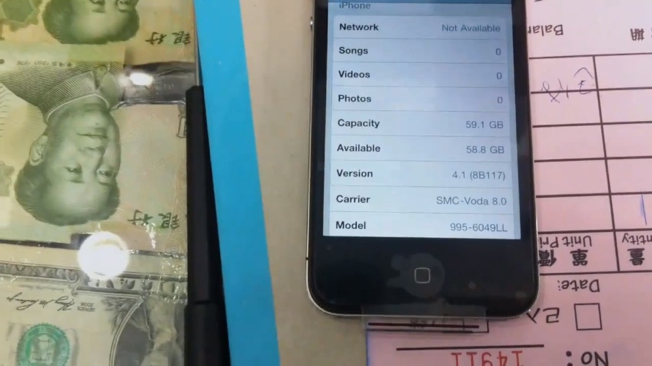 Hey guys, now, as you know, last year at about this time, Gizmodo got their hands on the next generation of iPhone, this turned out to be the iPhone 4. Now, there was a lot of drama and a lot of speculation and everything, we were sure the device was legit when we saw the images. I knew this was Apple’s device, turned out to be true.

Anyways, if you recall, Gizmodo’s iPhone 4 was remote wiped and there was no way to restore it since iOS 4 for iPhone 4 was still months away. Well, a couple days ago, i heard rumors of someone having gotten their hands on a 64Gb iPhone 4 prototype, it was just until today that I could confirm that this is legitimate.

It seems as though M.I.C Gadget got a hold of a leaked iPhone 4 “engineering prototype” from a back room deal at one of Apple’s Chinese production plants.

Now, some things of note, the back says “XXGB” like Gizmodo’s iPhone 4, this could signal that the phone they had was 64GB since other leaked units had 16GB or 32GB where the capacity was at. This could have been Apple’s way of concealing it.

Also, we have the serial number and judging by the way Apple does their serial numbers, this phone was manufactured about 1 year ago. Also, it carries the model number of 995-6049LL. It also lacks the “+ and “-” on the volume buttons, just like Gizmodo’s model. Oh, and it was completely unlocked, no carrier locks whatsoever as well as running iOS 4.1 (I guess they haven’t updated to iOS 4.2.1?)

This is pretty cool stuff. However, this makes you wonder, why didn’t Apple release a 64GB iPhone 4? This may also signal that a 64GB model is coming to iPhone 5, but maybe it will be introduced this Summer at WWDC.

Unwire.hk, is  reporting that you can purchase a 64GB iPhone 4 Prototype in Sin Tak, which is the greyest grey market in all of Hong Kong, so this means that they must have a few of them.